skip to main | skip to sidebar

Welcome to the home of Wirral Bikers Motorcycle Club

PLEASE NOTE THERE WILL BE NO CLUB RIDEOUTS UNTIL AFTER THE CORONAVIRUS OUTBREAK HAS BEEN DEFEATED. STAY SAFE AND STAY INDOORS.

We are a friendly group of bikers located on the Wirral Peninsula,
who through the pleasure of owning motorcycles have now formed the Wirral Bikers Motorcycle Club, we enjoy getting together for general rideouts, charity rides, camping trips and pub meets.

In the Summer we meet up for rides out during the week and also at weekends. Full details of these events are usually posted up within the Members Forum. In the Winter we still keep in regular contact by using the W.B.M.C. Members Forum, we also post updates via this website, our Facebook account and attend fortnightly pub meets.

Club Membership is by invitation through this website so if you are interested in applying for free membership and joining us on rideouts or for any of our other activities; then use the "Contact Form" immediately below this text. Membership is currently closed but all new applications will be added to the waiting list.

Just received this sad news about a fallen rider so if anyone, Members or Non-Members are free and can attend this Final Ride, it will be really appreciated by all concerned. On behalf of Wirral Bikers Motorcycle Club we send our deepest sympathy to Carla and her Family at this very sad time and to all the friends of her Brother.


"Hello,
I’m not sure if you’ve seen on face book but I’m organising a final ride for my brothers funeral. He loved all things bike and cars. He sadly committed suicide on the 20th September due to mental health.
We are leaving from Gabriel Close Moreton on the 10th October 2019 at 10am and asking those who have bikes and are free if they would follow our procession to landican. The louder the revs the better.
Thank you for your support
Carla Dymond"

Will Shakey Make it Seven ?

It'll Be Heaven With Seven

So who remembers the headline writers coming up with the "War for Four" title back in 2013 when 3 time Champion Ryuichi Kiyonari arrived back into British Superbikes to challenge the then current 3 time Champion Shane Byrne for a 4th BSB Title ?

As it turned out neither took the title, that honour went to Alex Lowes. So the "War for Four" headline appeared yet again in 2014. However this time Shane Byrne was successful and took his 4th Championship title. Kiyonari had trailed by 12 points going into the final round of the season at Brands Hatch but crashed during a free practice session and fractured his collarbone, thus ending his challenge for the Title.

Being an avid fan of "Shakey" I decided to coin my own phrases thereafter with "Strive for Five" and then for last season I came up with "In the Mix for Six" both first mentioned on Social media by me.
That said, I doubt anyone will remember or give me credit for this, so this year I've decided I should post my new phrase, "It'll Be Heaven with Seven" on my blog today for the 6 time BSB Champion and so dated  the day before the 1st round of BSB starts at Donington Park. 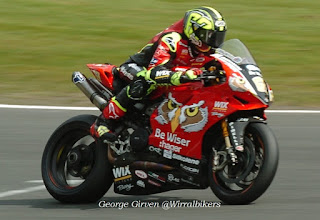 Hosted by Lingham Books of Heswall 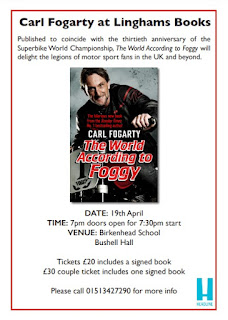 Published to coincide with the thirtieth anniversary of the World Superbike Championship, The World According to Foggy will delight the legions of motor sport fans in the UK and beyond and will be lapped up by those who have enjoyed books by Valentino Rossi, Guy Martin. Michael Dunlop, John McGuinness, Ian Hutchinson and Freddie Spencer.

Foggy's scintillating new book takes his fans into the memory banks of this most charismatic and straight talking of sporting icons, transporting them into the weird and wonderful world of this endearingly quirky hero of the track.

The World According to Foggy contains lashings, of adrenaline fuelled bikes and electrifying bike racing, thrills and spills galore, but it will also reveal the man behind the helmet, his passions and frustrations, what makes him still leap out of bed in the morning and seize the day - ultimately, what makes this great  man tick and explains his enduring popularity.
Venue:

Carl Fogarty Is Coming To The Wirral 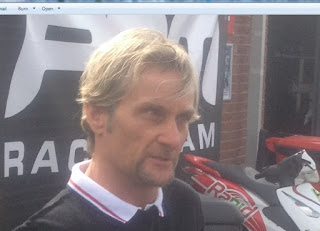 
Four time World Superbike Champion Carl Fogarty is coming to the Wirral on the 19th April 2018 for a Book signing evening hosted by Linghams Booksellers of Heswall.

The event will take place in Oxton, Birkenhead and his latest book, The World According to Foggy is being published to coincide with the thirtieth anniversary of the Superbike World Championship.

Further details of this event will be published very soon.
Posted by wirralbikers at 14:33 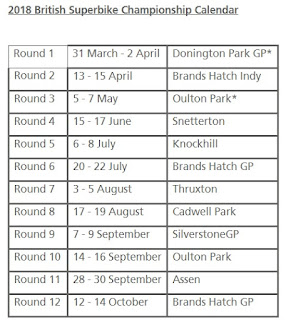 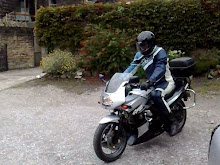 A meet up en route 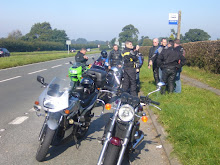 to join a Charity Run 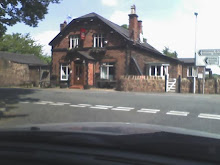